The Mazda BP-4W (99-up Miata 1.8L) Heatshield is a replacement intake manifold gasket made from special high temperature plastic, designed to insulate the intake manifold from the cylinder head.

Hondata have developed a special high temperature insulating gasket which replaces the stock intake gasket. This and bypassing several heat sources significantly reduces the transfer of heat from the head to the intake and incoming air giving you up to 5% more power.

Turbocharged cars often use an aluminum intercooler to cool the air compressed by the turbo. The intake manifold is also made of aluminum but because it is heated by the head from combustion and coolant, works in reverse to an intercooler by heating the intake air by as much as 50° C.

Fact: For every 3.3 °C (5° F) rise in intake temperature, air density drops 1%. The hotter the air, the less fuel the computer injects to compensate for reduced oxygen. HondaLogger datalogging software has enabled us to measure intake air temperature under varied driving conditions.

The Honda manifold is heated in up to 5 places. From the head, the interior heating takeoff hose, the cold idle valve, the idle control valve and the throttle body heater. The Heatshield gasket kit contains an insulating gasket, and installation instructions. A race version only version with the thermostat bypass blocked is also available.

The graph above shows the results of installing the Heatshield gasket and bypassing the throttle body heating and idle control valve heating. If you examine a Type R intake manifold you will find that most sources of water heating are removed. Further temperature drops are possible when in addition the interior heating hose is blocked. What the graph shows, is that as you open the throttle, the intake temperature drops slowly as it cools the intake. When you descend a hill with the throttle closed or drive around town on a light throttle the temperature climbs quickly. It takes a good 15-20 seconds for the temperature to drop again when you open the throttle. So if you start your 1/4 mile drag with a hot intake manifold - you are only starting to develop maximum power near the end of the run when the intake has been cooled. The Heatshield gasket kit gives you 4-5% more power immediately by lowering the intake temperature.

I was utterly shocked to see an average 10-25 degree drop in intake air temps, as well as a 5 degree differential between head/manifold exterior temp go to 50 degrees!!!

Here are some preliminary results using a scantool and the IAT sensor mounted on the back of the JR (supercharger) intake manifold...
Before the intake heatshield gasket and coolant bypass, the intake manifold temp at idle was around 130F and approx. 185F during 7psi boost @ approx. 6500 rpm. The outside temp was around 75F.
After the mods, idle temp is now 106F, cruise temp at 4000 rpm in third gear is 119F, and 7psi boost @ approx. 6600rpm is now 131F! However, the outside temp is also cooler at 45-50F. I'm waiting for a warmer day to conduct the test again. One thing that's very noticeable is the surface temp of the intake manifold comparing to the cylinder head. It's MUCH cooler to the touch. 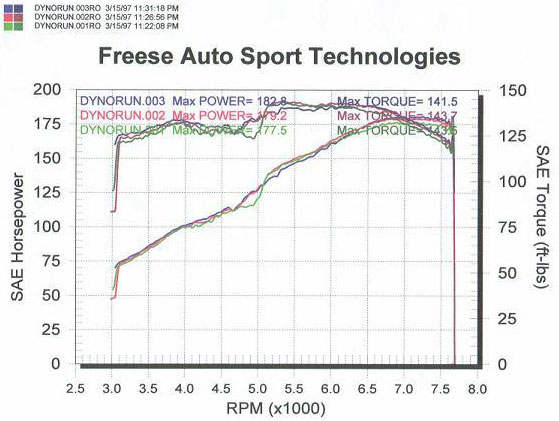